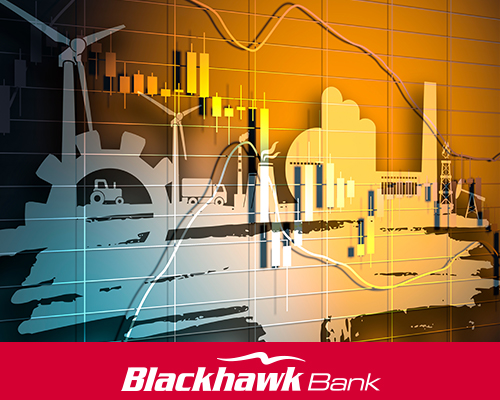 The Schaumburg Business Association recently partnered with Rick Zonts and Adam Hogan, Blackhawk Bank Business Bankers, to provide an overview on current economic conditions and a prospective economic forecast. It is important to stay up-to-date on economic trends in order to better prepare for the future. Having an economic plan set in place can be extremely beneficial.

The US economy expanded from January through March at a 3.2% annualized rate. Is that rate of growth sustainable?

The Q1-2019 growth and expansion of the US Economy at that 3.2% pace mirrored the growth experienced for 2018; which was measured at 3.1%. With that said, the robust expansion in the first quarter of 2019 is considered largely to have been a carryover from 2018 and the impact of the change to federal tax laws, etc. A more normalized growth should be anticipated through the remainder of 2019, with projections for annualized growth in GDP to be in the 2.1-2.3%. This is still considered healthy expansion by most measures.

How do the economic slowdowns occurring in Europe and China impact the US economic growth?

While one may anticipate the struggles in China and Europe to have similar negative impact to the Global economy and that of the U.S., that has not been the case in 2019. The US economy continues to expand at a pace well above Europe and China. US Interest rates have continued to remain low, historically. Despite multiple increases to the Fed Funds Rate throughout 2017 and 2018, the rate (which is the basis for the Prime Rate) has remained steady since December 2018 and is anticipated to remain flat for the near future. The 10-Year US Treasury has actually dipped from 2.71% in January 2019, down to 2.07% in July 2019. Borrowing costs remain low, which continue to bolster corporate investment and thus aid the US Economy in outpacing foreign economies.

What impact does the ongoing trade war with China have on the overall economy? Will this war on trade be effective and eventually strengthen domestic industries?

Initial impacts to Tariffs and the trade war with China were mixed results. Several U.S. industries, from technology, to steel, to farming experienced spikes in their own costs, and a negative impact from the initial tariffs. As of June 2019, the U.S. and China agreed to a trade war cease-fire during the last G20 meeting. Tariffs of foreign goods should make products produced by U.S. companies more cost effective by comparison, in theory. However, to-date, both U.S. and international firms have stated negative impacts from these tariffs.

Reports continue to point/predict an economic recession occurring sometime in the next two-to-three years. What are signs/indicators that a recession is occurring?

How should businesses prepare for this pending recession, and when should they start preparing?